I like Amnesty International. I really do. Part of it is probably related to the fact that it was the first human rights org I ever heard of. I was still a child growing up in the Argentinian dictatorship (the same one that cost the lives of an estimated 30,000 people) and I often heard of Amnesty mentioned in either hush conversations among adults or as an organization of “bad people” who wanted to destroy the country’s reputation. When I was old enough to understand what had happened, I also learned to love Amnesty. I do see how problematic and corporate Amnesty can be nowadays. I even got in a bit of an unfriendly exchange with a manager at my local chapter a few weeks ago, which I documented extensively in a blog post. 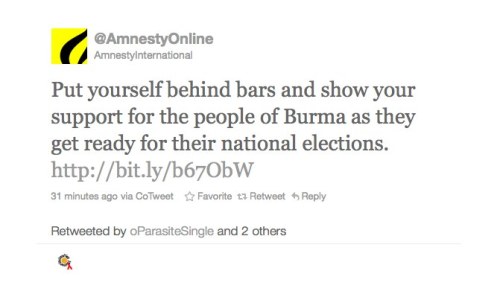 Still, I contend that they are, in general, a force for good. So today I saw in my Twitter timeline a URL for their Freedom for Burma campaign. I clicked. I saw. I laughed. In this campaign people are invited to photoshop themselves into a picture behind bars, as if the person was in jail. The site says that, by the time I am writing this, there have been more than 65,000 “actions” taken. It is unclear what exactly an “action” is by reading the site, though. In the “How does my photo help” section of the site, it states:

When you add your photo we will translate and send nine emails from you to the governments of nine of Burma’s closest neighbours demanding they support the three freedoms for the people of Burma: freedom of expression, peaceful assembly and association.

So what are you waiting for?

So, I am going to assume that each email counts as an “action”, which means that roughly 7300 people have uploaded a photo of themselves photoshopped behind bars. In other words, social activism for the Facebook era. Also, social activism that has no effect further than making the person who created the photoshopped depiction feel good about themselves. I am old enough to remember (and have actively participated) in protests in front of public buildings. Embassies, ministries, the legendary Plaza de Mayo in Buenos Aires, the streets of Rotterdam or Amsterdam, etc. You know the effect that such protests have? They cannot be ignored. The people you are protesting against are forced to look at those who oppose them. A hand written sign expressing disapproval, held in a public space confronts the oppressor with their actions. It also forces those who are complicit through their silence to face the consequences of their inaction. A photo uploaded in Amnesty’s site, as well intentioned as it might be requires that those in the Burmese government actually click on the link, go to look at the faces of their opponents and then click on “next” to see the next person. How many times do you think that has happened so far? None? Yeah, I thought so.

Now, I am in the unattainable position of having to consider the French revolution if it had happened in the times of Facebook.

Marie Antoinette uploads a photo of herself with a LOLCat caption saying “Let them eat cake”. A couple of thousand people click on “Like”. Then immediately, someone starts a fanpage called “Off with Marie Antoinette’s head”. A few million people join in. Quickly a series of photos of Marie Antoinette’s head photoshopped over the body of Admiral Ackbar are uploaded with the inevitable “IT’S A TRAP” caption. More people click on “Like” and soon everyone diverts their attention to a newly formed page called “Babes of Versailles” and a storm of bikini clad photos of Olympe de Gouges and Madame Roland are posted in quick succession.

So, go ahead, make a photo of yourself photoshopped behind bars. Only this time, think of Admiral Ackbar because “IT’S A TRAP”.