UPDATE JANUARY 6TH: A professional translator has kindly corrected and improved my clumsy and inadequate original version. This new version of the article is what you are reading now. I have sent him an email asking how he wants to be credited for this amazing effort but I have yet to hear back. In the meantime, I am updating this post with the better text because I notice it is getting many page views and I prefer it if people read the best possible version I can offer. To the anonymous (at least for now) translator that took the time and effort to work on this, I cannot thank you enough. You are my personal hero.

I just spent the last two hours translating this article. Now, I am not a translator. So, it will probably be less than perfect (moreover, it will probably have some serious flaws). It is long and meandering (the writer’s style is not very suitable for my poor translation skills). Also, I am putting some of it after a jump due to length, but a good chunk of it will be before, so, I apologize in advance for that, but I want some of the main facts to be part of my blog’s front page. This needs to be documented and I haven’t seen one single line in the international press and certainly nothing in Dutch press. This came out in today’s Argentinian Newspaper Pagina 12 (one of the biggest in the country). It is written by Horacio Verbitsky, a journalist with a career that spans for more than 50 years and who has been instrumental in Argentinian Human Rights and the pursuit of justice for victims of the dictatorship’s Junta.

I have taken the time to translate this article because it is fundamental that, as Dutch taxpayers, we know what our companies are doing in those places where they believe to be outside public scrutiny. Our welfare and food supply partially rests in the hands of these businesses. The state has an obligation to hold them accountable for the corporate practices that are absolutely forbidden by Dutch law (and in fact, they are also forbidden by Argentinian law). So, I am putting this out there. Nidera needs to be held accountable for what they do.

This is what Nidera’s Mission Statement says:

Nidera is a privately held company founded in The Netherlands in 1920, engaged in agricultural commodities trading and in agribusiness. The company is headquartered in Rotterdam with subsidiaries in 22 countries and enjoys an active global trading presence.

Our vision statement
“To be the leading multi commodity service & solutions provider in the global energy and agro markets.”

Our values
We value excellence in our relationship with our suppliers and clients achieved through integrity, commitment, efficiency, respect and responsibility. In good and bad times and on a daily basis we are up to the challenge to perform successfully and provide reliable, high-quality solutions for our business partners and customers.

And this is what they do to achieve those goals:

A new life by Horacio Verbitsky

The operation, launched on December 30th in San Pedro illustrates what out uncontrolled markets are capable of. Nidera, multinational agribusiness company that the AFIP (TN: Administración Federal de Ingresos Públicos or"Federal Administration of Public Income", the office whose main function is to enforce the tax and custom policy) is investigating for tax evasion of 260 million Argentine pesos (€49m), had been holding prisoner 130 workers from the North of Argentina, adults and teenagers who didn’t know where they were, were unable to leave, had no electricity or water and whose cash-in-hand wages were heavily discounted for the supplies sold by the company at extortionate prices, including pasta from the Ministry of Social Development that were supposed to be free of charge. 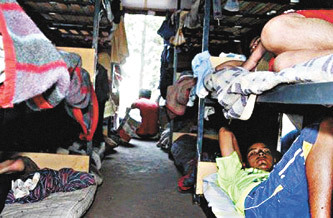 One of the major agribusiness export trading companies, investigated by the Argentine State for tax evasion, exploited adults and children as slaves, brought from the Northern provinces. They were housed in metal sheet trailers, where they slept packed together in groups of twenty. The working shifts were ten hours long, including Christmas, exposed to permanent sunlight, with no electricity or drinking water, except that which they received in buckets. They weren’t allowed to leave the property in which they worked and they didn’t know how much they were supposed to be earning. Payment was deferred to the last day of the illegal contract, which was not registered with the authorities. Meanwhile, everything they consumed was discounted from their salaries, at prices so exorbitant that they never had any positive balance left out of their salaries. They were charged 80 pesos for a bag of potatoes (TN: at today’s exchange rate, 15 Euros), 65 pesos for a bag of onions (TN: 12.25 Euros), 54 pesos for a chicken (TN: 10.18 Euros), 17 pesos for a pack of cigarettes (TN: 3 Euros)  8 pesos for a kilo of old bread (TN: 1.50 Euros) and 2 pesos to recharge their mobile phone battery (TN: 0.38 euros). Packs of pasta were also found bearing a label from the Ministry of Social Development. For a pack of such pasta, sale of which is forbidden by law, the slaves had to pay 35 pesos (TN: 6.60 Euros). The head of this Ministry, Baldomero Alvarez de Oliveira, is the political sponsor of the former mayor of San Pedro, Julio Pangaro (TN: San Pedro is the city where these events took place), who this year was appointed  Legal and Technical Secretary in the Ministry of Justice and Safety. Food past its sell-by date was also found. The only money the workers received during the three weeks prior to the police raid was 12 pesos (TN: 2.26 Euros) to buy a traditional Christmas Panettone. The provincial Minister of Labor, Oscar Cuartango, stated that the uncovered deeds came close to Crimes against Humanity.

The camp housed 130 people, amongst them around 30 children and teenagers, but the courts estimate that there are at least one thousand in similar conditions in nearby plantations in San Pedro. Their legal representation is in the hands of the Rural Workers Union, UATRE (TN: Spanish acronym), led by Geronimo Vanegas, founder, together with José Luis Barrionuevo of the General Labor Confederation. The UATRE delegates only arrived at the location once the leading district attorney in the District Attorney’s Office Number 6 of San Nicolas (TN: the office with jurisdiction on San Pedro), Ruben Dario Giagnorio, notified the Ministry of Labor of this situation. The UATRE representative in San Pedro, Cecilio Salazar, is the leader of the opposing peronist party in the area. […] In early December, Giagnorio, the District Attorney, ordered the Pueblo Doyle rural patrol to do rounds in the area’s fields, searching for irregular working situations, which are common during the corn harvest, when seasonal workers are brought from other provinces to degrain corn, an exclusively manual task. […] The patrol communicated their findings to Giagnorio regarding the Estancia El Algarrobo, a property located in the Municipality of San Pedro. This estate consists of 1600 hectares, of which 200 are rented out to Nidera. Access to the estate is difficult as it is located 12 km from the nearest road. On December 22nd, the District Attorney requested a search warrant to the judge in charge of Warrants Court Nr 1 of San Nicolas (TN: the court with jurisdiction over San Pedro), but judge Maria Laura Vázquez refused, alleging lack of proof. District Attorney Giagnorio instructed the patrols to stay away from the estate so as not to alert them of his intentions which could lead to the destruction of the camps before he had the opportunity to intervene. Faced with the Court’s refusal, he communicated his findings to the Provincial Ministry of Labor and Social Development and to the Human Trafficking Victims Office of the National Ministry of Justice. In such cases, the Provincial Ministry of Labor has Police powers and, on 29th December, they executed a search warrant to inspect the situation presented by District Attorney Giagnorio. Giagnorio participated in the procedure as an overseer. […]

Upon verifying the workers’ conditions, the District Attorney started procedures to bring charges on slavery and embezzlement of public funds (due to the sale of food distributed, for free, by the Ministry of Welfare to support poverty programs). However, the District Attorney does not have jurisdiction to investigate the Human Trafficking charges (as those pertain to the Federal Justice).[…] According to the Ministry of Labor, Nidera will have to pay a fine of 5000 Pesos (Ed: 943 Euros) for each unregistered worker. Amongst those arrested are two Nidera engineers, Nicolás Martínez Allende and Diego Carballo, two supervisors and three people in charge of food distribution. The District Attorney took their statements and they were released shortly after while the investigation continues.

Doctor Julio Carballo, in charge of the San Pedro Sanitation Office told a local radio that the living conditions for the workers were those of a concentration camp, including two holes in the ground to be used as toilets, only separated from the rest of the living quarters by a curtain made of bags bearing Nidera’s logo. He also witnessed how a teenager was bathing out of a bucket previously used to contain agro toxic substances “It’s enough to drive you  from indignation to tears”, he said. […]

Nidera is a transnational business, headquartered in Rotterdam, The Netherlands, leader in the Argentinian market in the areas of seeds and one of the biggest exporters of oils, cereals and related oil products. It has an approximate 10% market share.

Nidera’s Global Chairman, Martin Mayer Wolf, descendant of the company’s founding family, former president of the Dutch Argentinian Chamber of Commerce, is also a member of “International Action”, a Non Profit organization whose mission statement claims to help people get out of poverty by providing micro credit and promoting labor.

If you are in The Netherlands, they can be contacted at their Headquarters:

Request that they rectify this situation. Pass the link to this article to people you know. Become aware that, as consumers, we are buying the products, our food, which was produced through the suffering and slavery of these people. They need to change their practices. We need to hold them accountable.