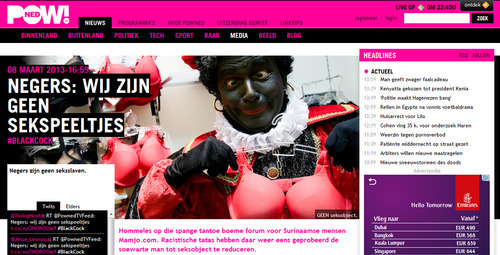 On march 7th we broke the news that a Dutch casting agency was looking for white women who’s heart beat faster by the mention of ‘Chris Brown, Usher and Denzyl (sic) Washington’. These women would be put in an apartment together in the Bijlmer, Amsterdam’s black neighborhood, and date black men as they got acquainted with the multicultural society in the Bijlmer. From the idea to the casting call we called this out for being an offensive and racist fail. They couldn’t even take the time to spell Denzel Washington’s name right. As was expected PowNed, a state financed public broadcaster in the Netherlands, responded to our news in the most racist and vile manner possible: ‘Negroes: We’re not sex toys #BLACKCOCK’

For those who may not know, Roet in het Eten is my media production collective. Mine in the sense that I am part of a team of six co-owners with whom we have two radio shows on Amsterdam’s public radio. Today, the biggest media corporation in The Netherlands (I wrote about them before here) published on one of the blogs they own an article where they call us “Black Journokids” (linking to a photo of us to “prove” their point, I suppose?), “Neo Panthers” and tagged the post with the hashtag “Blackcock”.

They are a multi million Euro corporation. We are a cooperative collective struggling to have our voices heard. How do we even stand against these media bullies?!