Who Makes the News?

GMMP (Global Monitoring Project), as part of a UNIFEM (United Nations Development Fund for Women) project have just released an extensive and exhaustive report on gender representation in the news (the fourth of its kind since the project started in 1995). They gathered data from 108 countries around the world. Trained volunteers from women’s rights organizations, media professional associations, and universities monitored the representation of women and men and gender portrayal in their local news media. The GMMP Report 2010 reveals what they found. With a total of 130 pages, the report details how gender balanced the news are on a given day. The report can be downloaded here in its totality.

From the report’s introduction:

What motivates so many people to do the unpaid monitoring of radio, television and newspapers? Why does it matter? Despite the recent proliferation of social media in some regions, news media remain the major and most influential source of information, ideas and opinion for most people around the world. It is a key element of the public and private space in which people, nations and societies live. A nation or society that does not fully know itself cannot respond to its citizens’ aspirations. Who and what appears in the news and how people and events are portrayed matters. Who is left out and what is not covered are equally important. The first GMMP, and as will be seen, the fourth GMMP reveal that the world reported in the news is mostly male. In many countries, the cultural underpinnings of gender inequality and discrimination against women are reinforced through the media.

Since the report is very detailed and packed with a great deal of facts and figures, I have created a series of infographics with some of the key findings.

The next graphic illustrates gender representation per topic: 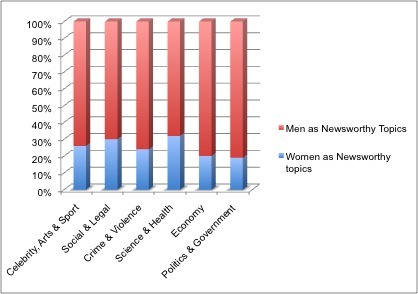 Men vs Women as Newsworthy topics

There seems to be a slight improvement in media representations of women in the fields of Science and Health but, as the report points out, this is also the topic with the least media presence of all. I should also note that usually, under the banner of Science and Health, fall diet tips, cosmetic surgeries and beauty treatments, all topics usually targeted at women. 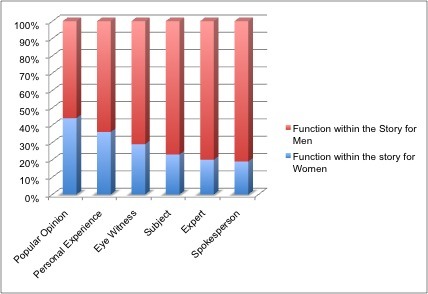 Men vs. Women Functions in a News story

Women are majorly portrayed as the voices of “Popular Opinion” and as reference of “Personal Experience” while men are either “Experts” or “Spokespersons”.

Which brings us to the next graph, regarding Occupations listed in the News: 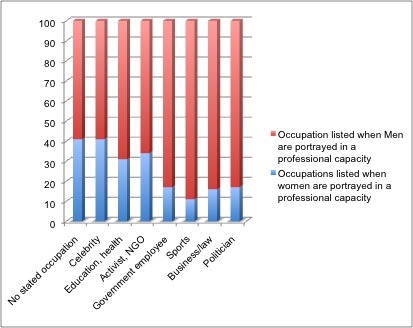 Men vs. Women Portrayed in a Professional Capacity

When women are mentioned in the news, in the majority of cases, their occupation is not mentioned, with a slight improvement if the persons listed are celebrities or activists.

Regarding specific Gender Awareness matters, the news paint an even bleaker picture 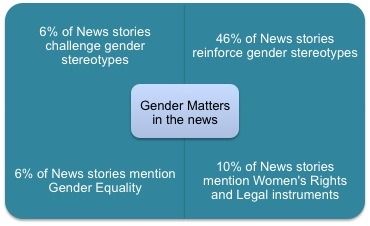 In the next few days/ weeks, I intend to continue collating the data in the report and bringing up other additional findings. For the time being, I hope this illustrates the current situation with clarity.